It has been incredible to hear some people expressing their surprise at the rapid price rises of R404A. At the time publishing our technical bulletin on Refrigerant Phasedown, price will be roughly five times what it was at the start of 2017– an astronomical rise by anyone’s standards and one that is clearly unsustainable for contractors with full service contracts.

Other higher GWP gases have also suffered frighteningly steep price increases, although not to the extent of R404A admittedly. But why is that any surprise to anyone? Several years ago Graeme Fox, Head of REFCOM was warning of the inevitable price rises of high GWP gases such as R404A. Many others were saying similar things, so it should have come as no surprise when that inevitable rise occurred.

If we re-examine the reasons then maybe we will agree that this has always been on the cards; and maybe agree that it isn’t such a bad thing in the grand scheme of things if our sector is to improve its image and demonstrate our responsible side to end users and clients. 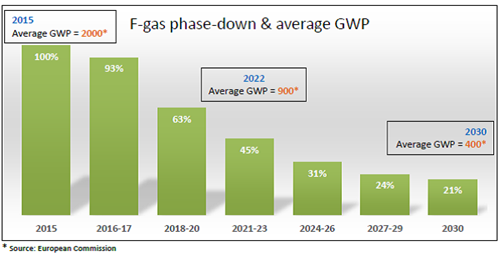 From the table highlighting the phase down steps we can see the initial drop down in 2016 showed only a 7% drop from the 2015 baseline limit of gas that could be placed on the single market. That may have been such a small figure that some buried their heads in the sand and convinced themselves that all would be OK.

The other problem we faced as an industry sector was that there was some considerable stockpiling of gas being placed on the market in 2015, ahead of the control measures being put in place. This was effectively flooding the market and artificially compressing the prices so that we actually saw some prices drop. But that only told part of the story…included in the 93% for 2017, but NOT 2016, was all the gas that comes pre-charged in split systems. Previously that had been excluded from the quota allowances but came into scope this year using a big chunk of the amount that can be placed on the single market in the form of gas supplied in bottles. This is like a hidden step where an additional 11% step down in 2017 has put pressure on the total gas being placed on the market total has meant that manufacturers have restricted supply of very high GWP gases like R404A in favour of lower GWP gases that don’t eat up as much of their quota. Already some gas suppliers are saying they simply won’t be placing any R404A on the market after the end of this year, which will further compound this price rise problem of course.

The implications of this effect are very serious for contractors and their clients. If contractors are signed up under full service contracts with their clients then they urgently need to look at their exposure. Any contract that includes any replacement gas may now leave the contractor exposed to large, and increasing, costs that may seriously affect their profitability. If any contractor is in this position and there is no immediate prospect of using alternative gases to the likes of R404A then they should seriously consider investing in a stock of gas at today’s prices – it won’t go down any time soon, if ever again.

End users not protected by inclusive service contracts will also need to urgently look at their systems, speak with their service contractors about options, and start planning either swapping out equipment using high GWP gases or converting existing equipment to lower GWP alternatives to the high GWP gases. This is something that requires expert advice as the alternatives are not of the “one size fits all” variety – different types of systems require different drop ins or retro-fits and proper advice and planning is essential if these systems are to be kept operational over the coming months and years.

As outlined in the previous paragraph, the best long term solution is to convert systems to lower GWP alternatives or to swap out the systems themselves as soon as possible. However, that is not always practical nor financially possible in the immediate window. As a short term measure it is allowable to use recovered gas until 1 January 2030, if that gas has been recycled or reclaimed from the same type of system (stationary refrigeration, air conditioning or heat pump equipment under the scope of the F-Gas Regulation). In the same way that recycled R22 was used to see people over the initial period post banning of HCFCs, recycled or reclaimed R404A will be essential if contractors are to mitigate the effect of the huge price rises currently occurring every few weeks. However, it is essential that contractors observe best practices when recovering gases if they intend using them for servicing use after 2020 when the ban comes in for using virgin gases with a GWP above 2,500. REFCOM registered companies will have seen the recently published new Technical Bulletin (TB023) on the subject of Refrigerant Recovery, which explains the difference between reclaimed, recycled and recovery. In a nutshell, recycled gas has had a very basic cleaning process applied to the recovered gas to remove non-condensables, oil, water vapour and particulate matter. Whereas reclaimed gas has been reprocessed to ensure the equivalent performance of a virgin gas. Reclaim is generally carried out by gas manufacturers; whereas contractors can, if recovery is carried out properly, recycle themselves by using filters and driers. This process becomes crucial to pay attention to when you are recovering blend gases like R404A as the constituent gases may not be in their intended blend after recovery, especially after a leak. The wider the glide of the zeotropic blend, the greater the danger of not recovering in the correct constituent blend. The effect of this, of course, is that the gas will not perform as expected, may have serious effects on efficiency and can even create a safety issue in extreme cases.

As always, the REFCOM and BESA Technical helplines are there for members concerned with issues like this to get advice and guidance.

Not yet a full member?

For a full access to a range of member only guides, downloads, support and benefits sign up now...