SkillFRIDGE competitors set their sights on the final

The qualifying heats of the 2017 SkillFRIDGE competition series have come to a close and the apprentices and students who took part now have their sights firmly set on the national final, with the top six set to be announced in September.

The host colleges, along with equipment providers Advanced Engineering, A-Gas, Fieldpiece, FSW and Vulkan Lokring, provided the perfect environment for the competitors to work to their full potential as they were challenged to display their skills and keep their cool under pressure during two tasks.

SkillFRIDGE competition operating partner manager, Karena Cooper says: “I would like to extend a sincere thank you to all of the colleges, equipment suppliers and judges who have shown a commitment to developing the talent of young people within this vital industry.”

Cooper continues: “Without the investment of their time and resources, the SkillFRIDGE competition would not be possible.”

Whilst one talented apprentice will ultimately win the SkillFRIDGE competition, those who competed in the regional heats note that they have already benefited from the experience.

Joseph Springett, who competed in the regional heat held at North Kent College, says: “The competition challenged me to be even more precise, down to the very last millimetre, whilst under pressure. It’s a great experience to prepare me for challenges that I might face in my job in the future.”

During downtime many of the competing apprentices made the most of the unique chance to talk with the industry experts, who were more than happy to share their wealth of knowledge and discuss the vast array of opportunities that lay ahead for those who excel within the industry.

Stephen Taylor, who competed at the regional heat hosted by Eastleigh College, says: “It was really helpful getting tips from the judges, which I’ve now put into practise.”

Each regional heat saw an apprentice be crowned the winner, but the real competition is yet to begin. All competitors will be placed into a nationally ranked chart and in September those with the six highest scores will be announced and invited to the SkillFRIDGE final.

Looking to the future of RACHP

Taking place as part of The Skills Show at the NEC Birmingham from 16-18 November 2017, where over 80,000 11-24 year olds will be in attendance, the SkillFRIDGE final will incorporate RACHP level 2 knowledge and practical tasks including charging and recovery of refrigerants to Fgas 2079 (cat 1) standards, plus elements of Level 3 RACHP.

The top scoring competitor will be crowned the SkillFRIDGE champion, and competitors who score above 65% will be automatically considered to represent the UK at the international WorldSkills competition which will be held in Russia in 2019.

The Skills Show is the perfect platform for those within the RACHP industry to tackle the skills shortage by presenting young people with the vast array of exciting and rewarding career opportunities that are available. Sponsoring SkillFRIDGE is the perfect way for your brand to show its commitment and support for the future of this vital industry, as well as being a part of a wide reaching national and international media campaign. 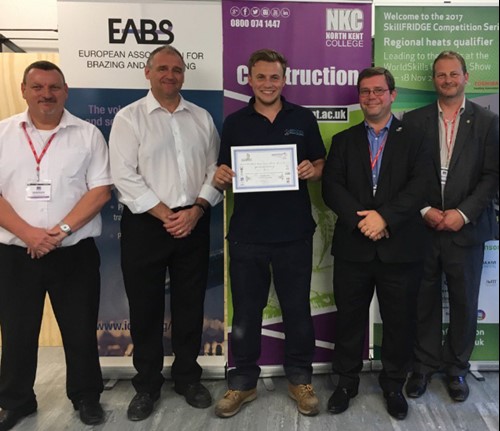